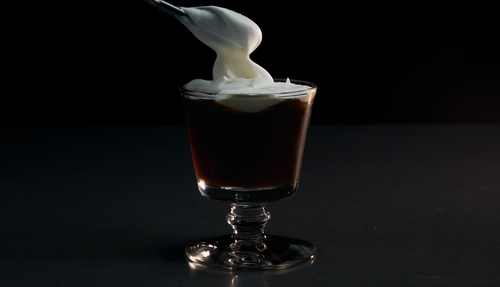 Created by influential barman Sasha Petraska, the Dominicana first appeared at his Milk and Honey bar around 2011. It has since become a staple at the Everleigh bar in Melbourne, where principle bartender Michael Medrusan brought it over from his tenure at Milk and Honey, serving it as their house White Russian. The cocktail is published in both Medrusan’s book A Spot at the Bar as well as Petraska’s posthumous publication Regarding Cocktails. Both books use the exact same recipe and truthfully, there is no reason for alteration; this cocktail is an underrated classic and an exceptional upgrade over the mediocre White Russian. Employ it as a nocturnal pick me up or as a lovely after dinner drink in place of an Irish coffee.

Rich and creamy, but without all the sugary elements common in similar drinks, the Dominicana feels decadent and confectionary without relying on sugar. Wet cream balances the acidity of the coffee—not unlike an irish coffee—while adding a silky-smooth texture and an unforgettable element of layering and dimension. Aged rum and coffee are just great together, and because the cream lingers as you drink, the Dominicana sports an amazing last sip, not unlike a booze-soaked cherry at the end of a Manhattan.

This drink deserves real whipped cream. We whipped ours by hand, but a stand mixer will work just as well. We liked ours with a wet cream similar to an Irish coffee; it was stable enough to not sink into the drink, but wet enough to blend well in the sip. Use the smoothest aged rum you can, because once the sip moves past the cream it becomes very strong, and a more acidic rum will combine with the coffee for a total stomach bomb. Something like El Dorado 12 year would work great. As with most drinks that call for coffee liqueur, Mr. Black is delicious and more complex than Kahlua. Medrusan recommends subbing in Tequila for something a little different, and vodka for a drink even closer to the famous White Russian.